I logged out of Facebook and stayed out for a month. During that time, I discovered that I had more mental clarity, focus, and could actually get more things done.  I enjoyed that so much that I went one step further to deactivate my Facebook account – though I must admit I am curious as to how that will affect the views on this blog because I was using the Publicize feature, connecting my blog to my Facebook account. But I will see.

So here’s a summary of how I found life without Facebook:

1. I realized I benefited from the absence of all the ‘noise’ on Facebook

Social media is like a noisy market, full of people peddling all kinds of things — their opinions, their favourite songs and movies, quotes, their rants, photos, achievements – from what they cooked for dinner to where they went for vacation. I did all those things too when I was using Facebook actively. Scrolling down my Facebook newsfeed felt like walking down the street where there were so many things on display, and I made many stops to take a look at them without getting much takeaway in the end.

2.  I felt more peace and freedom to just be, instead of feeling pressured to keep doing and achieving

On a public forum we will tend to only disclose the positive side of our lives, at the majority of the time at least. It’s easy to have our minds be influenced by that illusion of perfection and before we know it we start to feel discontented with what we have. On Facebook, everyone’s life is not only awesome, but picture perfect.

3. I don’t miss out on my regular dose of helpful and necessary information

Brendon Burchard, for example, maybe among the most followed public figures on Facebook, but I am able to stay updated with his latest videos and books by subscribing to his email newsletters. I used to read Forbes articles via Facebook, but what’s so difficult about typing http://www.forbes.com on my browser?

4. I felt more present in my daily life and work

Aside from getting more things done at work, I also became more motivated to nurture real-life connections, especially at work, where I spend most of my time. Before going off Facebook, the sense of belonging (whether false or real) I had from chatting, posting updates, and exchanging comments online, even if they were with people I hardly met up with caused me to be lazy and complacent to the extent that I would eat lunch at my desk. I thought it was because I wanted to finish my work faster to go home earlier, but looking back, the real reason was probably that I had consumed a lot of my social energy online till I didn’t have much left to be present with people in the flesh. I have since started to engage more with the people at work – and it has certainly been enriching!

So after my first Facebook post in one month, I suddenly felt my mind getting cluttered with noise again. And somehow online bantering just did not feel so meaningful anymore. I dropped a private message with my phone number for a  former university classmate whom I had not seen in many years since we mentioned possibly meeting up, and another one for a friend who is organizing an event I am interested to attend. And then I deactivated my account.

This prompt is quite difficult for me to write on because I don’t celebrate Halloween. But I remember having fun trying on funny Halloween hats at Hong Kong’s Ocean Park with my friend Sarah when we traveled to that country during Halloween season 6 years ago. Too bad the photos are on my old laptop. I thought I looked  pretty good and interesting with a tall, green coloured witch hat with green-colored snakes hanging all over it.

Back to the prompt–so I can pretend I have run out of candy, but for the kids to scare me, I can’t imagine  what they can possibly do. Unless they are wunderkinder who can come up with some realistic sound effects of some supernatural beings, or impersonate my dead relatives really really well.

But I have a feeling they could easily succeed at annoying me, especially if they are not that cute, and if they ring my doorbell at my down time.

And wait, is Halloween a day where children have a legitimate excuse to be rude and annoying? Hmm. Anyway, to those of you who are celebrating, Happy Halloween!

One of the earliest posts I wrote.

1. The model who goes for casting after casting, gets rejection after rejection, until a break comes when an ad director says ‘You have the kind of looks we want!’ and she gets to start making her mark.

2. The aspiring author who works on his or her manuscript, often late into the night because of their day job, and knock on publisher after publisher’s door until they find one who believes in their work.

3. The budding entrepreneur who makes cold calls, writes and distributes promotional material, tweaks his website and business model, networks, promotes, and continuously improves and refines what he has to offer until he breaks even and sees the tip of the profit iceberg.

4. The piano teacher who patiently gives his best to the one student he has, until his pool slowly grows.

5. The novice blogger who consistently writes and improves her blog posts…

Dear God
Will You do
That
Which only You
The Sovereign God
Subject only to Your own will
Can do
Exceedingly
Abundantly
Far above all that my finite mind
Can conceive
Here is my petition
Blow my mind
Dwarf my imagination
The way only You can
The God of all possibilities
In the name of Your precious Son, Jesus
Amen.

David slight and still
staring up at Goliath
leverage or break

Tears shed in the dark of night

As fleeting as the illumination that you get

When the door of the fridge is opened by the tempted

And the emotionally challenged

Are the trials and tribulations

For light comes without fail

God has made it such

That it is dawn that breaks

11 For the Lord God is a sun and shield;
the Lord bestows favor and honor;
no good thing does he withhold
from those whose walk is blameless.

Sometimes waiting for God’s will to come to pass feels like fighting the temptation to eat the first marshmallow–but if we would just wait for His appointed time, we will have two marshmallows instead of one.

And my God is faithful, whatever He has promised, He will surely deliver. 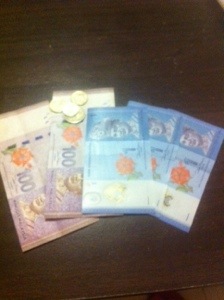 As part of the Young Enterprise CSR program, I bought MYR 10 (USD 3) worth of shares in a student-run company, and made MYR 203.45 (USD 62) back in dividends: a whopping return of over 2000 percent and no doubt, the most profitable financial investment I’ve ever made in my life.

This is part of LindaGHill’s One-Liner Wednesday:

Who could tell the pain that exists alongside such beauty?

Three months ago, inspired by my first solo travel to New Zealand, I wrote this post, The Paradox of Travel, about how I travel looking forward to enhancing my perspective. After New Zealand, I had another vacation to Phuket Island, Thailand, albeit not alone this time.

It’s been 3 days since I bid the beautiful island goodbye–a good time to reflect on the trip. Flashing through my mind as I write is the image of a male beggar I saw at the local night market we went to, wanting to experience a slice of daily life there. I noticed the ugly stumps on his right hand–he had lost all his fingers except for the thumb, with which he was holding the cup he used to beg for money. He was sitting on the dirt floor with a crutch next to him, so I guess he couldn’t walk unaided. But what I really cannot forget was the look on his face–his eyes were red and moist though I did not see any tears, and he was just glaring into space. I thought I sensed a mixture of grief and anger, and helplessness and defiance. All that aside, he looked physically healthy, a man in mid to late thirties of medium build.

I didn’t quite know what to do, and I felt uncomfortable giving him money so I just walked away. Beggars can be a common sight, and some may be bogus…but this one…maybe with the look on his face, I sensed he might have been there by force and whatever money given to him might just go to some cruel human trafficking syndicate.What could I have done now, I wonder. Make a report to local police that there was a beggar sitting at the corner of the Kamala town night market?

As it turned out, I did nothing about the beggar, and just went on shopping for dinner, which we took back to our suite to eat before showering and then heading out for more massages. On my first day in Phuket, I had three massageas – a foot reflexology in the morning almost right after we arrived, and then a full-body traditional Thai massage after dinner, followed by another foot reflexology, just because the masseuse was so good I became reluctant to leave after the full-body massage ended!

The next day, we took the free hotel shuttle to the  central Patong area, where all the action was supposed to be. Shopping at nearby local stalls while waiting for the Jungceylon Shopping Mall to open its doors at 11 am, once again I encountered the harsh reality of life on this touristy island.

“Tell me what price you want, miss. Give me some good luck, you’re my first customer today.”

“What do you want? Do you want this bikini? No? Then you go away.”

I looked at the quiet lane where these stalls were situated, and concluded that these traders were really hard pressed for business. There had been crackdowns recently by the Thai authorities on stalls selling imitation branded goods, which had driven many tourists away.

I ended up buying a floral dress and a pair of shorts from the first trader for 400 baht after some haggling–partly because I liked the dress, and my sister liked the shorts, and partly because I felt a bit intimidated by the gangster-looking seller! “400 baht, only for you, miss, because you are my first customer today.”

This is almost good enough for me to want to go to Phuket again. This, and the massages.

We quickly left the stalls and we happily joined the crowd that had gathered in front of the mall and went in the moment the doors opened. Lunch at the mall’s food court, Food Haven, was good (I miss the Patong coconut ice cream already!)… and after that we encountered a few more frustrated stall owners inside the mall, but at least within the confines of the air-conditioned complex, we did not feel so threatened.

Back at Kamala Beach, where we stayed, the shop owners seemed to be facing a similar quandary. Only the massage parlours enjoyed reasonably good business.

We smiled and walked on. We were on holiday, but once it ended, it would be back to work too for us, and back to the daily reality, harsh or not.

All over, we are all just humans, trying to working out our own levels of survival. Some are more fortunate, some are less…but dare we complain and insist on carrying another person’s cross? I choose to be thankful for my lot, and make the best out of it.

Phuket, surprisingly, has turned out to be quite a humbling experience.

This blog has been viewed

Will You Help Me Raise USD 2620 for TFK? Click Now to Donate!